I was thrilled to have been chosen to be featured in the anthology Lovejets: Queer Male Poets on 200 Years of Walt Whitman edited by Raymond Luczak, a prolific writer, in praise of Walt Whitman, my favorite poet of all times. Whitman was the poet who inspired me as a high school student when I didn't know much about anything, really. I read Leaves of Grass and knew intuitively that Whitman and I had more than one thing in common. Later, of course, I would see the light of day and the rest is history. 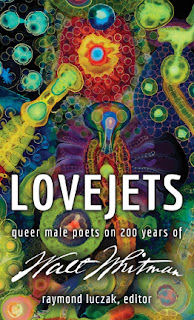 “This wide and impressive range of poetry echoing the spirit of Walt Whitman and his literary forebears demonstrates the essential embrace of community that we’ve always needed to feel whole with ourselves and among others, especially now during these tumultuous times. Celebrating what had to be largely hidden from view during Whitman’s day, the living queer male poets who grace the pages trumpet a glorious and unforgettable spectacle of passion and compassion.” —Richard Blanco, Presidential Inaugural Poet

Pick up a copy and start reading.
Visit: Squares and Rebels