Elaine Ray of Stanford, California has won the 2016 Gival Press Short Story Award. Her story titled Pidgin was chosen by Thomas H. McNeely. The award carries a prize of $1K and publication in the ejournal, ArLiJo.

Praise for Pidgin:
“In fewer than twenty pages, Pidgin sketches a world of its narrator of color’s post-colonial migration, political activism, and imprisonment within the choices offered him by history. At the same time, it’s a narrative that seems shaped by mysteries that transcend and yet throw into sharp relief its political moment, the chief one being the brilliant voice of its narrator, who is at once mercilessly exposed and utterly enigmatic. Elaine Ray is a writer who plays by her own rules, and is a writer to watch.”—Thomas H. McNeely, judge and author of Ghost Horse 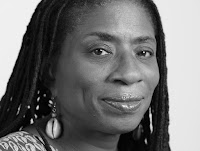 (photo by Linda A. Cicero)
About the Author:
Elaine Ray, a journalist and fiction writer based in Stanford, California, grew up in Pittsburgh, where she had many imaginary friends, characters. She has spent most of her career as a journalist, working for many years as an editorial writer for the Boston Globe and as an editor and writer for Essence magazine. She is currently a communications director at Stanford University. Her blog: My Father’s Posts, is a collection of her own commentary and the writings of her father, who was a journalist in Harlem from the 1920-1940s. She recently completed the online novel-writing certificate program offered by Stanford Continuing Studies and is working on the final draft of a novel titled Wanted.