Poetic Voices Without Borders 2 Is Released 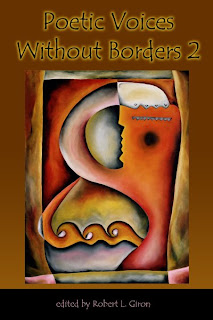 Gival Press is pleased to announce the release of Poetic Voices Without Borders 2 edited by Robert L. Giron. Upcoming readings are scheduled for March 18th at the New York Center for Independent Publishing (NYC), April 23rd at the Arlington Arts Center (Arlington, VA), and April 30th at the Halsted Center (Chicago).

The voices are passionate and enlightening while echoing a desire in their own way to transform, to change, to transcend borders, be they personal, cultural or national, in a poetic manner as if to say that within literature there isn't a border for the human spirit, for it is that energy that keeps us going.

Calls for Entry include: Plan B Press chapbook competition, judged by Deborah Ager. Winner gets 50 copies of their book plus $225 award. Send manuscript with table of contents, list of previously published work (if any), SASE, and $15 reading fee. No mss. returned. Deadline: March 1. Plan B Press, PO Box 3242, Fairfax, VA 22038. http://www.planbpress.com/contestnew.html

The Word Works Washington Prize. Publication and $1,500 given annually to a US or Canadian poet. Submit ms. of 48-64 pages with $25 entry fee by March 1. http://www.wordworksdc.com

Split This Rock 2009 Adult Poetry Contest. $1,000 awarded ($500 for 1st place, $250 each for 2nd and 3rd) for poems of provocation and witness, judged by Patricia Smith. Winning poems published on website, and winners get free registration to the 2010 conference in DC (where the 1st prize winner will be invited to read). "Submissions should be in the spirit of Split This Rock: socially engaged poems, poems that reach beyond the self to connect with the larger community or world; poems of provocation and witness. This theme can be interpreted broadly and may include but is not limited to work addressing politics, government, war, leadership; issues of identity (gender, sexuality, race, ethnicity, disability, body image, immigration, cultural heritage, etc.); community, civic engagement, education, activism; and poems about history, Americana, cultural icons." Send up to 3 unpublished poems, no more than 6 pages total, in "blind" reading format with cover page, plus $25 reading fee. Simultaneous submissions OK. Postmark deadline: March 9. http://www.splitthisrock.org/contests.html.

Workshops and Special Events include:Sol y Soul presents a workshop, "Capturing Fire: Queer Revolutionary Poetics," led by Regie Cabico. Four Mondays: Feb 2, Feb 9, Feb 16, and Feb 23 from 7-9 pm. Fee: $80. "We will examine the poetry of queer activists from Audre Lorde to Essex Hemphill and those poets pushing the boundaries of the erotic. We will play with experimental forms of writing and use the poetry spoken word slam genre as a catalyst to create new work in a supportive environment. This workshop also addresses the elements of craft, form and performance and is open to all levels and sexual identities." Space limited; reserve by Feb 1. Flashpoint, 916 G Street NW, Gallery Place neighborhood, DC. (202) 315-1320.