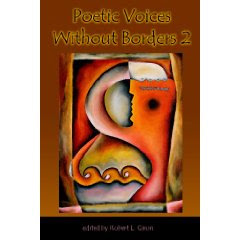 Poetic Voices Without Borders 2
has won the 2009 National Best Book Award for Fiction & Literature: Anthologies, sponsored by USA Book News. Congratulations to the contributors and Ken Schellenberg, the book designer.

To buy a copy at Amazon.com, click on the link below:
Poetic Voices Without Borders 2.


The finalists in the 2009 National Best Book Award category included:

Cuentos del Centro: Stories from the Latino Heartland
by the Latino Writers Collective

Randoms
by Keith B. Darrell

Not quite poems but more
like the rind of poems,
how your wine glass, raised right,
coaxes a plump ruby from falling
afternoon light. How we know
the river scene, sun-dazed
shock of blue and white to silver,
could use a sailboat.
What the boaters might say.

I love it when you say “marinara,”
say anything at all, like
“try some of this.”
A waft of butter and garlic
roams from your bowl to mine,
mine to yours, as our words
find a rhythm we might walk.
We look from the canvas
back to each other, touch glasses,
let the silence breathe a while,
then head on down that road.


Sunil Freeman is author of two books of poems, That Would Explain the Violinist (Gut Punch Press) and Surreal Freedom Blues (Argonne Hotel Press). He is assistant director of the Writer's Center, and has been a managing editor of Poet Lore, the nation's oldest continuously publishing poetry journal. He is the Washington, DC Branch Bureau editor of the Party for Socialism and Liberation's website, www.pslweb.org. His poems have appeared in several journals and anthologies, including Gargoyle, Bogg, Abbey, Minimus, Wordwrights, The Delaware Poetry Review, Beltway, Kiss the Sky: Fiction and Poetry Starring Jimi Hendrix, and Cabin Fever: Poets at Joaquin Miller's Cabin, 1984-2001.


To read more of his work, click on
ArLiJo.com

Dreaming that Shaman, the Tongue

1
Because our tongues move us
from one unknowing to the next,
let nothing obscure the mystery
of that thumb-deep vault
my open mouth,
the cave where Eurydice is lost
where Orpheus, your tongue,
enters only the ante-chamber.

3
A man leads a horned cow,
morning, evening, across a square.
Your tongue is that well-served cow
and the man who shepherds him.
My tongue is the breeze from the mountain
that licks your sweating skin.

Across the square a white temple
with gold framed arches, open door.
Your mouth is that temple and my tongue
waits to enter, a redbird losing color in captivity.

4
Your tongue whirls in one place
like a Dervish of Damascus
whose red gown tulips
around his spinning knees.
My tongue is your chanting enchanter.

That wild clock spinning us
backward: glass to sand,
sand to freshwater pearl and forward
into a universe of whirling.


Mary Kay Rummel’s newest poetry book is Love in the End (Bright Hill Press, 2008). Other books of poetry are The Illuminations (Cherry Grove Collections 2006), Green Journey Red Bird (Loonfeather Press), The Long Journey Into North (Juniper Press) and This Body She’s Entered (a Minnesota Voices Award winner from New Rivers Press). Recent publications include: Nimrod (as an award finalist), Askew, Dust and Fire where she is the 2009 Diane Glancy Award winner, Lavanderia, the Irish journal—The SHOp and Poetic Voices Without Borders (Gival Press, 2005). Her short fiction is forthcoming in an anthology from Wising Up Press. She loves to collaborate with visual artists and musicians. She divides her time between Minneapolis and Ventura, CA where she teaches at California State University at Channel Islands. More information and poems at marykayrummel.com.

To read more of her work, click on
ArLiJo.com

That Demon Life by Lowell Mick White Is Released 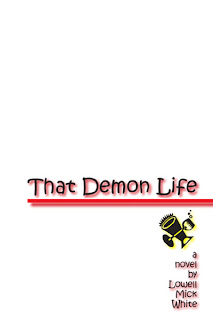 Gival Press is pleased to announce the release of That Demon Life, winner of the Gival Press Novel Award, by Lowell Mick White of College Station, Texas.

“Here is the story of success in spite of oneself, rendered with a sly and witty and wry appreciation for the ordinary horrors of everyday life. That Demon Life is a hoot, a virtuoso tale by a master story teller. Mr. White, where have you been keeping yourself?”
—Larry Heinemann, author of Paco’s Story, winner of the National Book Award

“Lowell Mick White takes readers places John Grisham’s novels overlook. With a keen eye for the absurd, White gives a glimpse into the lives of the hapless and dysfunctional attorneys and judges who inhabit the Capitol of Texas.”
—Christine Granados, author of Bride and Sinners in El Chuco

"Lowell White’s first novel, That Demon Life, is hootenanny of jurisprudence, internet sex, false teeth, and box wine—all under the big skies of Texas. White's mischievous prose makes the fabulous realistic and the absurd an afterthought. Through it all, the audacity of the narrative allows us ample opportunity to laugh, even when the joke is on us.
—Adrian Matejka, author of The Devil’s Garden


"The slacker blonde has found her muse! In the hilariously disinclined attorney Linda, a no-account Austinite whose idea of legal research is a rerun of Law & Order, White has given us a transgendered update of the madcap A Confederacy of Dunces. Indeed, you could say Dunces is done one better in That Demon Life, because this swift-moving new picaresque of work-avoidance takes us into the realm of sex…."
—John Domini, judge for the Gival Press Novel Award

Biography:
Lowell Mick White is author of the story collection Long Time Ago Good (Slough Press, 2009). His work has been published in over two dozen journals, including Callaloo, Iron Horse Literary Review, and Short Story. In 1998 he was awarded the Dobie-Paisano Fellowship by the University of Texas at Austin and the Texas Institute of Letters, an honor that has previously gone to such writers as Sandra Cisneros, Dagoberto Gilb, and Stephen Harrigan. White lived in Austin for 25 years, at various times working as a cab driver, as a shade tree salesman, and as an Internal Revenue Service bureaucrat. He is currently a PhD student at Texas A&M University, where he specializes in creative writing and regional literatures, and teaches creative writing and freshman composition.


To buy a copy on Amazon.com, click on the link below:
Amazon.com

Voyeur by Rich Murphy Is Released 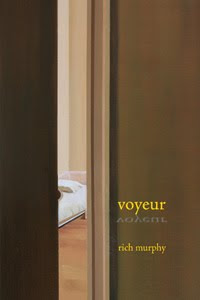 Gival Press is pleased to announce the release of Voyeur, winner of the Gival Press Poetry Award, by Rich Murphy of Marblehead, Massachusetts.

“Mr. Murphy is a very careful craftsman in his work, a patient and testing intelligence, one of those writers who knows precisely what he wants his style to achieve. His poetry is quiet but packed, carefully wrought, not surrealistically wild, and its range not limited but deliberately narrow. It takes aim.”
—Derek Walcott

“In Voyeur, Rich Murphy earnestly explores the complicated nature and innate integrity of the ‘wild’ -or even divine- feminine as subject to chance, circumstance, and interaction with the masculine. In some sense, a pervasive longing at once subtle and tense, for a ‘natural life,’ defines this collection of poems. Murphy’s Voyeur, while never revealing the *I*, bares a sensitive and often perplexed masculine narrator. But this bemusement, and a masculine struggle to fathom the feminine, is essential to the manuscript; it is the elemental brightening force of this aptly titled collection – a vision to previously veiled poetic spaces. While Murphy’s poems are most often set in a contemporary world of suburban gyms and kitchen tables, they nonetheless draw from aspects of Greek mythology, recalling the Homeric king Odysseus and sorceress Circe; however, as in the centuries-old tract established by the poet Sappho, Murphy’s paramount focus rests not on stories of gods and heroes but rather in the quiet sublime of the turning of hours in a life at once familiar and heterodox.”
—Ginger Knowlton

“In Rich Murphy’s exciting and sexy collection Voyeur ‘men / and women fall in love with their minor / economies and haggle over appearances / and favors.’ Murphy reveals to us that ‘I pan from coast to coast / and bedrooms frame acts of the American / Dream in abandon.’ Like family, Voyeur is complex yet accessible, and Murphy’s powerful use of metaphor will intrigue you, ‘Husbands and wives fill houses/ with doodads and two strangers.’ But also ‘father’s fetishes, mother’s moods, / and aunt’s angst, are wrapped in love.’ Voyeur is a reflection of the family seen through the eyes of an extremely gifted poet.”
—Leah Maines, author of Beyond the River and Looking to the East with Western Eyes

“Voyeur is a work of vision and virtuosity. Concerned with relationships, marriage, sex and power, the poetry is dense, rapid, dazzling, the voice commanding, the speaker charismatic…The poems are extraordinary as individuals, from the intriguing declarative first sentence of each down to its decisive, glistening last line. And as a collection, like 'a subtle song [that] travels / from ancient feet through hearts / to first breath in the world,' Voyeur is spectacular."
— Richard Carr, judge and author of Honey

Biography:
Rich Murphy holds degrees from Boston University, including a graduate degree in creative writing. He studied with the late George Starbuck and Derek Walcott. He currently teaches at Virginia Commonwealth University and lives in Marblehead, Massachusetts.

His credits include a book of poems The Apple in the Monkey Tree (Codhill Press); chapbooks Great Grandfather (Pudding House Publications), Family Secret (Finishing Line Press), and Hunting and Pecking (Ahadada Press); poems in hundreds of journals in Anglophone countries; and essays in such periodicals as The International Journal of the Humanities, Journal of the Assembly for Expanded Perspectives on Learning, Reconfigurations: A Journal for Poetics Poetry / Literature and Culture, Fringe, and Big Toe Review. His essay on poetry’s evolving ecology will be in a special issue of The Journal of Ecocritism (University of British Columbia). His work has been nominated for several awards.

To buy a copy on Amazon.com, click on the link below:
Amazon.com