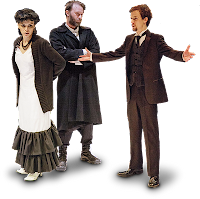 Calling all Francophiles and philosophy / ethics majors in the DC area.

If you are a fan of Albert Camus or if you simply enjoy good theatre that will provoke thought, then you must get to the Artisphere in Arlington to see the WSC Avant Bard production of Les Justes [The Just Ones].

The play in a newly translated version adapted by Rahaleh Nassri is not only fresh to the ear but also current given our history of terrorists, etc.

Sublimely directed by Jay Hardee and equally acted by a well-balanced cast the flow of words will hit you like a professorial comp session--not that it is bad, it's simply that by the time you process something you are hit by other thoughts going through your mind. But in truth that is what is required of this play as we watch a plot unfold--how else would one plan an assassination?

I suggest that you see this play before the tickets sell out; it's truly a must see play for it touches on various compelling quotidian issues yet it is set in a different century of European Resistance.

Click on the link below for details:
WSC Awant Bard

The story The Music She Will Never Hear by Kristin FitzPatrick of Alameda, California was chosen by previous winner Daniel Degnan as the winner of the 2011 Gival Press Short Story Award. The stories were read anonymously. The cash prize is $1,000.00 plus online publication.

Those who made the top listing include the following:

That Sardi's Smile
by Mark Connelly of Milwaukee, Wisconsin.


To read the story, click on the link at ArLiJo:
The Music She Will Never Hear (visit: ArLiJo)

Reaching a 100 Years of Age 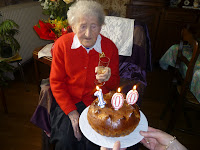 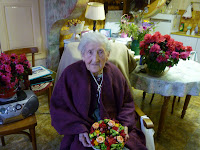 It is extremely rare when one can boast about a relative turning 100 years of age, but today I am proud to say that Tante Germaine GIRON of Lorraine, France joined the select group of centenarians.


I suppose there is something in my genes that will have me possibly lurking around at an old age, God willing. My father will be 92 this year, though his parents didn't live to be quite old his grandparents passed the 80 mark; my mother will be 81 and her father lived to be close to being 95 and her mother 87. So something tells me I had better keep in good shape for the advanced years.

Finally, Happy Birthday to my sister, Jeannie, whose birthday is also today and who is quite young!

Catch a Play in the Coming Weeks

There are two plays currently in the DC area that I recommend highly.

First of all, in Arlington at Signature Theatre there is Really Really by playwright Paul Downs Colaizzo which is stunning and masterfully acted by a well-chosen cast.

I don't believe in giving the details away but just know that you will leave thinking about this play for quite some time because the content is disturbing on various levels. The most troubling is perhaps general ethics and the saying "what goes around comes around" just doesn't make things better. This close knit group of 20 something are played by Evan Casey, Lauren Culpepper, Danny Gavigan, Paul James, Bethany Anne Lind, Jake Odmark, and Kim Rosen.

The direction by Matthew Gardiner and set design by Misha Kachman are so carefully done that they seem natural and the very first night of preview was so on target that one would never know it was the first night for the play.

Yes, it's nice to be entertained by song and dance but sometimes one simply needs a good shot of drama and trust me this will fulfill that need of yours. Children need not attend and for adults who are shocked, well, get a life and look around you and see life for what is really out there. Some of it ain't pretty.

Go out and see Really Really because it's really, really good!

I have many loves in life but I simply can't live without art, so if you have the same reaction or inclination, then go to Arena Stage and see Red by John Logan.

The play is based on Mark Rothko's life and once again the actors are superb. Edward Gero plays Rothko and Patrick Andrews plays his assistant Ken.

In this short play directed by Robert Falls, without an intermission and rightly so because it would simply break the continuity, you will be given a tablet of intellectually stimulating conversation and equally intriguing you will leave thinking about the concepts and interpersonal relationships and perhaps ask: Why are people they way they are?

I suppose if we knew that and had that under control we wouldn't need psychologists or the like and we would all be happy and go lucky--a paradise like Hawaii but reality tells us that the human nature tendency is one towards boredom so at least change and drama keep us on our toes and less bored but, boy, at what cost?

Anyway, I also suggest that you get to the Phillips Collection to see the famous Rothko Room and experience his art after having seen this provocative play.

Calling all poets to the 2012 Split This Rock Poetry Festival!

If you have the inclination to listen to some fabulous poets and/or simply to rub elbows with those who think alike, then be sure to put March 22-25, 2012 on your calendar. This somewhat annual festival has been held since 2008 in Washington, DC, and from the looks of the program it will be quite a busy event this year.

Here below are the goals of Split This Rock:

1. To celebrate the poetry of witness and provocation being written, published, and performed in the United States today.

2.To call poets to a greater role in public life and to equip them with the tools they need to be effective advocates in their communities and in the nation.

The name "Split This Rock" is pulled from a line in “Big Buddy,” a poem from Langston Hughes.

The work of writing the poems that split open the injustices in society is in some ways a solitary act, but it is also an act that requires community. Split This Rock calls all of us to split this rock, and to do it together.


For more details please click on the link below: