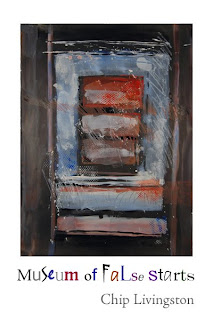 Gival Press is pleased to announce the release of Museum of False Starts by Chip Livingston of New York City.

Livingston’s poetry has been called unique because he writes about his diverse background. Though he lives in New York City, he has Mvskoke ancestral ties and he is a gay poet. The combination of these two has led him to write from a varied place, yet it is accessible to the reader. This is Chip Livingston’s first collection of poetry.

“…Not a false start at all, this first book is a distant drum announcing a fresh vision and an original approach to craft in our poetry.”
—Alfred Corn

“All poets must juggle the sacred and profane and each must make some kind of peace with the paradox, fight it, or find a unique road in the up and down. Chip Livingston, in his first book, Museum of False Starts, makes a distinct trail of poems, through Mvskoke ancestral country, through the maze of American myths, through bars and parties at the edge, through disturbance and awe. What an auspicious beginning!”
—Joy Harjo


Biography:
Chip Livingston’s poems and stories appear widely in literary journals such as New York Quarterly, Ploughshares, Mississippi Review, Cincinnati Review, McSweeney’s, and New American Writing. He has received awards from Native Writers’ Circle of the Americas, AABB Foundation, and Wordcraft Circle of Native Writers and Storytellers. He has taught writing for the University of Colorado, the University of the Virgin Islands, Brooklyn College, and Gotham Writers Workshops. He lives in New York City.

Look for him on Facebook.com

To order a copy, visit:
Museum of False Starts at Amazon.com

ArLiJo.com is currently featuring fiction Recovery about anorexia nervosa in men by Isaac James Baker and Burial by NC Weil.


Isaac James Baker is a 26-year-old writer originally from New Jersey. A journalist and reporter by trade, he currently works as a communications specialist for the federal government and is working on a master’s degree in fiction writing from Johns Hopkins University. His first novel, Broken Bones, the story of a young man’s struggle in a psychotic ward for individuals with anorexia nervosa, is being published by Historical Pages Company in 2010. He lives in Washington , D.C.


NC Weil prefers the elbow room of novels to the restricted arc of short stories, though she writes both along with songs, poems and film reviews. Her fiction has appeared in the anthology Electric Grace (Paycock Press, 2007). Weil is the President of the Washington, DC Chapter of the Women's National Book Association, a network of women and men devoted to books and literacy for over 90 years.

To visit the Washington, DC Chapter of Women's National Book Association, click on the link below:
WNBA