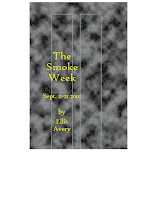 Read this compelling award-winning memoir written by Ellis Avery in ebook format. The book was published by Gival Press in 2003.

The Smoke Week: Sept. 9-11, 2001 tells the story of the week of 9/11 and what New Yorkers saw, felt, and experienced during this tragedy. This award-winning memoir is both personal and stands as a testimonial of this historical nightmare.


“...Stories will keep falling for years to come. Poets do it best, I think. Nothing to wrap up. Ellis Avery arrives at her Smoke Week like any New Yorker, hadn’t planned to live through a disaster, yet she talks exactly like she did. It happened to her in a city that she knew and is learning to know differently. Her account is human, historic, falls exactly like poetry, and is simply a very good read.”
—Eileen Myles


Biography:
Ellis Avery teaches creative writing at Columbia University. She is the author of a novel, The Teahouse Fire and her most recent work The Last Nude. Her work has appeared in The Village Voice, Publishers Weekly, and Kyoto Journal, and has been produced onstage at New York's Expanded Arts Theater.

Buy an ebook now at Barnes and Noble (Nook):
The Smoke Week at BN.com

Baroque Style Music Is the Craze in Opera Now

Finally I have heard an opera in English that didn't sound odd, strange, or flat.

This weekend the Met had its HD Live performance of The Enchanted Island which is truly a wonderful experience and one I would recommend without any hesitation.

The opera was devised and written by Jeremy Sams, who along with the all the creative cast, created a charming story line by mixing arias by Handel, Vivaldi, Jean-Philippe Rameau and others with a bit of Shakespeare to create the plot.

It was simply magical how it was all woven together so well and performed with such finess that I am convinced that the medium for the English language in opera should be the baroque style.

Now, if it is Broadway, then of course that's another cup of tea altogether but English and the baroque style are what bread and butter are on the dinner table because they seem to blend in the operatic fashion one is accustomed to hearing opera perhaps in French, Italian and German. But sadly too often English falls flat but not in the baroque style.

So get yourself out and see the Met HD Live (repeat of this performance) or look for an opera in English sung a la baroque.

Then after seeing this performance, I took in the NSO with guest conductor James Gaffigan, with featured pianist Ingrid Fliter.

The National Symphony Orchestra played very well, including the emotive US premier of Fluss ohne Ufer by composer Detlev Glanert.

Based on how the audience responded, the performances by all including Fliter hit the mark and one could not see anyone displeased in the least.

Here is an opportunity to read poetry, get in touch with your personal Muse,
and experiment with new approaches to life and art….

Sessions begin with a discussion of a poem written by a well known,
contemporary author. You will also have an opportunity to: Enjoy Fun Exercises to help generate poems, which can be read aloud (if you choose) in a supportive atmosphere.

Write poems in voices of cranky relatives or loopy friends, or serious poems in first person—using vivid memories, plus current and future dreams.

Discover the poetry in your name and in the landscape of your life. Experiment with fresh, creative ways of thinking by tapping your creative well. Please bring 10 copies of a favorite poem by another poet or info about one you would like to write to the first class.

∞∞ In Cooperation with The Writer’s Center, Bethesda, Maryland ∞∞

Take a break from this extended weekend due to Martin Luther King, Jr., and our society that has decided to honor his life and contributions to our society, and read some poetry.

Here below is a sampling of Mary Ann Larkin's poetry from her most recent book of poetry.

Gone, the silver-green silk of time
winding down centuries
of custom and kinship,
the pouring of the sea, the stars
on the slate of night, the moon
stamping the spire of the church
on the sand. Time itself changed
to a ticking, a dot on a line.
Customs of grace
and gentleness gone
name-saying and knowing
who begat whom
and when and where
and who could work
and who could sing
and who would pray
and who would not
and where the fish ran
and the wild plums hid
and how the old mothers
fit babies’ hands
to the five-flowered hollows
of blue ladyfingers,
and whose father fought whose
with golden swords
a thousand years ago
at Ballyferriter
on the strand below the church.
Gone from a silken spool unwinding
to rooms of relics and loss
behind whose locked doors
I dream, not daring to wake.

To read more, click on this link:
Mary Ann Larkin on ArLiJo


And now to the Golden Globes, it seems I might have predicted the winners:

The film The Artist has won both Best Actor, Jean Dujardin, and best Picture: Comedy/Musical.

Meryl Streep has another win for The Iron Lady. What an incredible career she has had.

A good night and to all sweet dreams.

Catch a Film This Weekend--Bring in the New Year!

The New Year has rung in and so far I'm recovering from body fatigue (a cold and work on my tooth)--it'll get better.

I've been busy getting tax information in order and need a break, sigh, yes, this has to get done and will but let me digress.

Since Christmas I've been able to catch a few moments of bliss:
1. Lovingly watching snow fall on the Franklin Mountains of El Paso before Christmas and perhaps all the while a bit anxious because I wasn't able to travel over the mountain to see my sister and nephews and nieces but wrapped up in getting my iPhone apps in order. Nonetheless, the snow was lovely and I got a day of needed lost time.

2. I heard Iestyn Davies, countertenor, perform at The Phillips Collection. Quite a treat considering that we had heard him the day before in "Rodelinda" from the Met via Live DVD. It's amazing what one can do with his voice, the first musical instrument, and yet still sound manly to boot in real life.

3. Yet the best escape was watching "The Artist" a silent film made in 2011. This is directed by Michel Hazanavicius, who also wrote the scenario and dialogue
(--for the reader). The stars: Jean Dujardin and Bérénice Bejo were heavenly and John Goodman does a very good job.

The silent George Valentin is seeing his career take a tailspin in the Hollywood of 1927 because of the Talkies, while his partner of sorts Peppy Miller's speaking acting career raises and eventually they are involved (I won't spoil it for you; you have to see this film.).

George Clooney is the lead, with Shailene Woodley and Amara Miller. It's not a fun film but it's not "Terms of Endearment" but close; enough said.

So there you are--some suggestions for some safe escapes. Enjoy.