In addition to having her poem published online on the Gival Press website, Sarah Machinak received a cash price of $100. Here below is her winning poem and the list of finalists for the contest.

I awoke in my bridesmaid gown, panties draped
over hotel room doorknob. The pressure

of the wedding gift was painful. But
it was the least I could do after ten years

of friendship. I knew something was amiss
at the rehearsal dinner—could sense her un-

spoken fear as only a best friend can.
She knew there was a possibility

of being labeled L.B.A. (Lesbian
by Association), and we couldn’t have that.

Of all the best friends at Saint Joe’s, why did
she have to pick the lesbian? The girl

who nervously looked away in the locker
room before cheerleading practice, where an

turning red, sweating, wishing to escape.
Not to mention the sleepovers. What kind

of girl shares her king-sized canopy princess
bed with a lesbian, who must lie

rigidly in the dark, as far away
from her best friend as possible, so as

not to accidentally touch her? After
the wedding, I could be gay again, we

decided through telepathy. So I passed.
Passed on facebook-friending the bridal party,

so they wouldn’t see that I was Interested
In: Women; passed on flirting with Amy,

the cute bridesmaid with whom there was extended
eye contact; passed on genuine conversation

at the rehearsal dinner. But something
had to give. Had enough wine with my meal

to make flirting with the groomsman to my
left seem less than repulsive. Enough wine

a-man-soon-too. At the wedding before
we were announced, hiding in a back room

with the rest of the bridal party: chugged
two beers on an empty stomach when the

underage best man commented on his
allergy to my brand of lip gloss. “No

making out for you two tonight,” the other
guys joked loudly. To which I replied that

the best man was “just a baby, much too young
for me.” Failed to mention that he had the wrong

anatomy. I passed. And I drank. Gave a
wasted maid-of-honor toast and an

impromptu blessing when the priest was running
late. Danced inappropriately with the boldest

of the groomsmen. Pounded shot after gin-
and-tonic after shot. Drank like I hadn’t

since sophomore year of college, since years before
realizing my love of women. I blacked out,

of course, and remember nothing in between
dancing and awaking sans panties. Perhaps

my best friend will decide that L.B.A
is not so embarrassing in hindsight.

Sarah Machinak is an emerging poet who lives and writes in Pittsburgh. She has worked in the social services field since earning a B.S. in psychology from the University of Pittsburgh. She plans to attend Chatham University’s MFA Creative Writing Program this fall.

The Break Up
by Michael Montlack of New York, New York.

On Turning 40
by Michael Montlack of New York, New York. 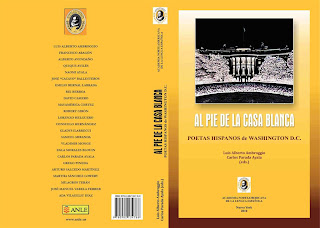 Calling all Spanish-speaking lovers of poetry.

The recently released Spanish-language anthology of poetry titled Al pie de la Casa Blanca: Poetas Hispanos de Washington, DC (At the Foot of the White House: Hispanic Poets of Washington, DC) edited by Luis Alberto Ambroggio and Carlos Parada will hold a reading at the Haskell Center of the Folger Shakespeare Library on Friday at 6.30 PM.

The following poets will be reading from the anthology in Spanish.

In Westcliff Flats,
a poor township,
I found, at last,
a quiet, peaceful sleep,
hard to come by
in Fortress South Africa.
Perhaps, the dogs
had all been eaten.

2. The Poor Live Off Our Garbage.

In New York,
they collect empties,
catch-as-catch-can
—and bottle—
a nickel a pop.

In South Africa,
young men glide up
to stopped cars,
bearing garbage bags,
sagging, wrinkled,
all the air let out.

In the mendicant position,
“Half a rand,”
they ask (seven cents),
“a quarter, anything.”


[“Buck” is Sousth African slang for “rand.” I wrote these poems after spending seven weeks in Botswana and South Africa.]

To read more poetry, please click on the link below:
ArLiJo.com