ArLiJo.com is currently featuring a short story by Hemil Garcia Linares and poetry by David Lott.

Journalist and writer Hemil Garcia Linares was born in Lima, Peru. He has published articles in Peru’s El Comercio newspaper, as well as in several Hispanic periodicals in the United States. He is editor of Raices Latinas, a bi-monthly magazine in Northern Virginia. His stories have been included in anthologies in the United States, Mexico, and Argentina. He was a finalist at the 2008 Junin Pais International Short Stories Contest in Argentina. Contact him at his webpage, www.hemilgarcia.com, and blog, www.hemilgarcia.blogspot.com.


But if he had seen

in this Caribbean courtyard


As every star is a sun in potential

is a sun in miniature

and each carambola tree


David G. Lott, an associate editor of Potomac Review, has taught English at Montgomery College for seventeen years. His work has appeared in Light, Aethlon, Washington (D.C.) City Paper, and Opium, and he is currently working on a collection of poems called Gringo in Guayama, about his time living in a small Puerto Rican town.


To read the ArLiJo.com issue, click on the link below:
ArLiJo.com 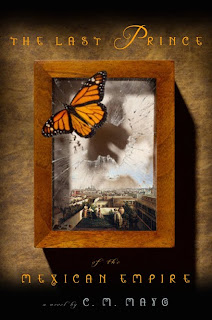 For those of you who are perhaps engrossed with all the talk of the Maya 2012 calendar and the soon-to-be-released film "2012," 19th century Mexico might be a less traumatic period to read about.

With The Last Prince of the Mexican Empire, writer C. M. Mayo has placed herself on the mantel for not only engaging the reader but for creating a fascinating tale of the individuals (based on real characters) and the tensions of the historical period of 1864.

In a nutshell, without giving away the story, Mayo lucidly gives us the background and the inner desires of the leading characters, which include Alice Iturbide née Green (who it turns out had a Washington, DC connection) and eventually Maximilian and Carlota of Mexico under French rule.

Mayo who has so elegantly described Mexico in her other books does a great job of pulling the reader into this true story yet it is her imagination that has filled in the details. It is so cleverly done that the reader buys into the plot and wants to turn each page to discover what will come next in this whirl of Mexicans, Americans and Europeans.

On a number of different levels, many of us can identify with the drama of this period, be it ethnic, cultural, or political, for while one reads he has to ask himself: What would have happened if things did not turn out the way they did in Mexico? Is this the nature of things to come?

For myself, I can't wait to pick up the book and read it once again, for the history and personalities are so vivid that Mayo makes me want to visit these folks again, perhaps to echo a period I should know.