Review of "dirty laundry: a memoir in poems" by Janet Buck 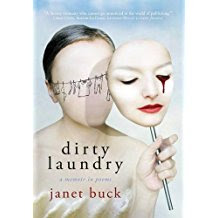 Writing is a personal act and poetry is even more so in that the poet either takes on another’s voice or speaks directly from one’s core. In dirty laundry: a memoir in poems Janet Buck does more than that in her latest book as she washes through her memories and hangs her thoughts and actions out to dry in the sultry sunlight for others to read and perhaps more so for a needed catharsis.

Reading Buck’s work is at times simultaneously warm and chilling, for she is speaking on a level that anyone can relate to if only we allow ourselves to shy away from our inner thoughts and denials and allow ourselves to lie stripped of our disguises and clutter. In the poem “The Firm Eclipse” she writes:

Every memory I have is siphoned
from a wishing well.
I’m guessing I was born with thirst.
I crack my knuckles just to corner certainty
about what carrots used to do
when they were fresh—
to get a sense that something
breaks the silences.

In an earlier section in the same poem, she foretells what the undercurrent is:

I begged for snapshots of a flower
just to fill a scrapbook with a sketch of lies,
where skeletons belonged instead.
My husband says, “Your face is pale.”
I know the shade, the color of a raw potato
ready for a boiling pot.

In this poem like many others, Buck allows us into her personal world to fathom the intricacies of normal life, which when examined carefully, reveals the onion skin layers of wants and needs, much like those we all long for but are too afraid to speak of privately, much less publicly.

Be warned, this is not an easy book to read but absorbing it creates the same catharsis Buck is laying out to air. In the poem “Tooth Decay,” she reminds us that we all are playing with the same deck of cards:

Can’t put everything that wrong
In crock pots just to stew for hours.
I’ll shake garlic from a jar—
all my dread will disappear.
In the end, we all play bridge
with tattered cards, aces fall
from baggy sleeves.

On more than one occasion, Buck lets us know she has hope, as in “Counterpointing Onyx Clouds”

I want to say “Hello” to spring,
yet I’m not certain it will stay.

I need those open irises, lemon poppies,
daisy wheels a child picked because she could.

While in “Goodbye to This & That & Him,” she writes about their late father:

Rays of light are fast sleep, but
suns of polished marigolds must lie ahead.
My dad will meet me at the plane—
the other end of incubus.

Where both will meet on that ethereal, celestial plane.

Buck is the author of four books of poetry, including Tickets for a Closing Play which won the Gival Press Poetry Award. Her poems, over 4,000, have appeared in print and online. She was honored by being included in the United Nation's Exhibit Hall in New York for her disability poetry.


Click here below for the link at Amazon:
dirlty laundry: a memoir in poems
br>