"The Best of Gival Press Short Stories" Is Released 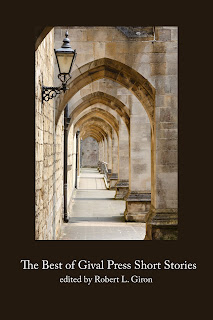 Click here for the paperback at Amazon.com: The Best of Gival Press Short Stories

Click here for the ebook (Kindle) at Amazon.com: The Best of Gival Press Short Stories

Click here for the ebook (Nook) at BN.com: The Best of Gival Press Short Stories

This anthology contains the winners of the Gival Press Short Story Award for the past 11 years.

These award-winning stories both inspire and instruct. They deal with the complexities in one’s everyday life which can lead to tragedy Water by Tim Johnston to the revelation of the moment that can stun I-95, Southbound by Perry Glasser to one’s betrayal Void by Karenmary Penn to mysterious and ambiguous motivations that drive our impulses Harvest Cycle by Marie Holmes to a family member who discovers his sexuality Legacy by Iqbal Pittalwala to one’s partner who can’t feel the music that liberates The Music She Will Never Hear by Kristin FitzPatrick to entering the loneliness of a young man’s aspirations On the Verge by Tim Mullaney to echoes of the ancient Cain and Abel rivalry Progressive Linkage by Steven J. Cahill to how we calculate our decisions and live our difficult lives Fat Tails by Daniel Degnan to how we struggle to connect with others Better Terms by Mark Wisniewski to understanding the complexities of others’ relationships For All the Obvious Reasons by Lynn Stegner. In short, these stories will hold your attention because they are vividly cast and the characters are so real you are bound to identify with them on different levels, even if you may not be walking in their footsteps.

This collection is a good choice for general pleasure reading or for creative writing students wishing to learn from contemporary master writers of fiction. This anthology is also a good companion reader for courses of composition, introduction to literature / fiction, or creative writing.

Biography of Editor:
Robert L. Giron is the founder and editor-in-chief of Gival Press. He is the author of five collections of poetry and the editor of several award-winning collections, including Poetic Voices Without Borders and The Sligo Journal. He co-edited the award-winning anthology An Interdisciplinary Introduction to Women’s Studies with his colleague Brianne Friel. He’s an associate editor of the Potomac Review and is the editor of the online journal ArLiJo which features art, fiction, and poetry.

Contributors:
Steven J. Cahill lives in the Northeast Kingdom of Vermont where his creative nonfiction and memoir pieces have been published in Vermont Magazine, North Country Journal, and Good Living Review. His prize winning fiction appearing in Gemini Magazine was nominated for a Pushcart Prize and the Dzanc Book Award, and three of his short stories were chosen for New Hampshire fiction anthologies. His work is also included in a Hurricane Press collection and the Catamount Arts poetry anthology.

Daniel Degnan is a recipient of the Maureen Egen Writers Exchange Award from Poets & Writers. His work has been published in the anthology, 2Do Before I Die, and online by Opium Magazine and Poets & Writers. He was a Sarah Lawrence submission to Best New American Voices and a finalist in Opium Magazine’s 500-word memoir contest. In addition to writing, he is CFO of Winston Preparatory School, a school for learning disabled students with campuses in New York, NY and Norwalk, CT. He holds a BS in Art and Design from MIT and an MFA in Creative Writing from Sarah Lawrence. He lives in River Vale, NJ, with his wife, Dao, and his son, Daniel.

Kristin Fitzpatrick is the author of My Pulse is an Earthquake, a short story collection (West Virginia University Press, 2015), which was a semi-finalist for the 2014 Mary McCarthy Prize in Short Fiction. FitzPatrick’s work has appeared in journals such as Colorado Review, The Southeast Review, and Epiphany. Her writing has also been chosen for the Thomas Wolfe Fiction Prize, The New Short Fiction Series, and Stories on Stage. She is the recipient of fellowships from the Jentel Artist Residency Program and The Seven Hills School. Originally from the Midwest, she now lives and writes in southern California.

Perry Glasser author of Metamemoirs (Outpost19, 2013) has also written four other books of prize-winning prose. Riverton Noir was recipient of the 2012 Gival Press Novel Award; Dangerous Places (BkMk Press, 2009), a short fiction collection that received the 2008 G.S. Sharat Chandra Prize; Singing on the Titanic (The University of Illinois Press, 1987), a book recorded by the Library of Congress for the blind, and Suspicious Origins (New Rivers Press, 1984), short fiction, winner of the Minnesota Voices Competition. In 2012 he was named a Fellow of The Massachusetts Cultural Council for Creative Nonfiction/Memoir. He has been in residence at The Norman Mailer House, The Virginia Center for the Creative Arts, Yaddo, and Ucross, earned his MFA in Fiction at the University of Arizona, and teaches professional writing at Salem State University.

Marie Holmes was raised in various places, but mostly in Portland, Oregon. She lives in New York and earned an MFA at Sarah Lawrence College. Her stories have appeared in the Coe Review and Blithe House Quarterly, and Teacher’s Voice. She teaches Spanish in New York City.

Tim Mullaney is a 2005 recipient of the Asian American Writers’ Workshop’s Van Lier Fellowship. His shorty story Beanstalk was published in Washington Square. His play What to Say was given a reading by TOSOSII Theater as part of the Robert Chesley/Jane Chambers Playwrights Project and his short play Close Your Eyes was workshopped at the StageLeft Theatre in Chicago. Mullaney is a graduate of the Creative Writing for the Media Program at Northwestern University, where he received the 2001 T. Stephen May Award for Excellence in Scriptwriting. As an actor, he has appeared in various productions, notably the Goodman Theatre’s world premiere of the Philip Glass opera Galileo Galilei, directed by Mary Zimmerman.

Tim Johnston is the author of the novel Descent (Algonquin Books, 2015), the story collection Irish Girl, and the Young Adult novel Never So Green. Published in 2009, the stories of Irish Girl won an O. Henry Prize, the New Letters Award for Writers, and the Gival Press Short Story Award, while the collection itself won the 2009 Katherine Anne Porter Prize in Short Fiction. Johnston’s stories have also appeared in New England Review, New Letters, The Iowa Review, The Missouri Review, Double Take, Best Life Magazine, and Narrative Magazine, among others. He holds degrees from the University of Iowa and the University of Massachusetts, Amherst. In 2011-12 he was the Jenny McKean Moore Writer-in-Washington Fellow at The George Washington University, and he teaches in the Creative Writing Program at the University of Memphis.

Karenmary Penn who lived in Bermuda for several years now lives in southern California with her husband, Kevin, and her daughter, Chloe. She earned her MFA in Creative Writing at the University of Arizona. She was a Schaeffer fellow at the University of Nevada in Las Vegas. She has published stories in Indiana Review, Red Cedar Review, Willow Springs, Gulf Coast, Pittsburgh Quarterly, Glimmer Train, and the Chicago Tribune. She has received a Henfield fellowship, a Nelson Algren Award, and an artist fellowship grant from the Nevada Arts Council.

Lynn Stegner is the author of five works of fiction, three of them novels--Because a Fire Was in My Head (which won the Faulkner Award for Best Novel and was a Literary Ventures Selection, a Book Sense Pick, and a New York Times Editors’ Choice), Undertow, and Fata Morgana--and the novella triptych Pipers at the Gates of Dawn (Faulkner Society Gold Medal in the novella category). She has also written an extended critical introduction to an assembly of her father-in-law’s short fiction, the Collected Stories of Wallace Stegner, as well as editing and writing the foreword to a Penguin edition entitled Wallace Stegner: On Teaching and Writing Fiction. She also has taught writing at the University of California, Santa Cruz, the University of Vermont, the National University of Ireland, Galway, the Santa Fe Writers’ Workshop, and Stanford University where she is currently teaching in the Continuing Studies Program. Among other honors, she has been the recipient of a Western States Arts Council fellowship, a National Endowment for the Arts fellowship, a Fulbright Scholarship to Ireland, the Bridport Prize, and a Raymond Carver Short Story Award. The anthology, West of 98: Living and Writing the New American West, which she co-edited and introduced, was published in September of 2011, and her volume of stories titled For All the Obvious Reasons is forthcoming. She divides her time between San Francisco, California and Greensboro, Vermont.

Mark Wisniewski’s novel Watch Me Go (Penguin Putnam) was released this year. His other novels include Show Up, Look Good (Gival Press, 2011) and Confessions of a Polish Used Car Salesman, as well as the collection of short stories All Weekend with the Lights On and the book of narrative poems One of Us One Night. His fiction has appeared in magazines such as The Southern Review, Antioch Review, New England Review, Virginia Quarterly Review, The Yale Review, Boulevard, The Sun, and The Georgia Review, and has been anthologized in Pushcart Prize and Best American Short Stories. His narrative poems have appeared in such venues as The Iowa Review, Prairie Schooner, Poetry International, Ecotone, The Hollins Critic, and Poetry. He’s been awarded two University of California Regents’ Fellowships in Fiction, an Isherwood Fellowship in Fiction, and first place in competitions for the Kay Cattarula Award for Best Short Story, and the Tobias Wolff Award. In addition, his stories have won a Pushcart Prize. He lives with his wife on a lake in upstate New York.