Finally Supreme Court Justices Stevens, Ginsburg, Breyer, Souter, and Kennedy have ruled in Hamdan v. Rumsfeld that the Administrative Branch must follow current law or wait until Congress authorizes it to do otherwise.

Let no one forget that at the root of Hamdan v. Rumsfeld was the right to a trial and for the person being held to be informed of what he/she is being accused of so that he/she can be represented by an attorney. That the case involved detainees as a result of 9/11 must not be overlooked. I truly do not believe anyone wants proven criminals to be walking the streets, but in order for anyone to be "justly" locked up in a democracy there needs to be a legitimate rule of the land and the 5 justices have made this clear to the Administrative Branch.

I wonder what Justices Scalia, Thomas, and Alito were thinking when they dissented and why Chief Justice Roberts did not vote. 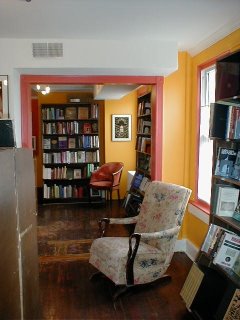 If any of you out there are near Kensington, Maryland, you are welcome to visit Kensington Row Bookshop on Wednesday, 28 June 2006, at 7 pm, and hear C. M. Mayo and yours truly read from our work. The event is free and open to the public.

C. M. Mayo, founding editor of the bilingual TAMEME, editor of MEXICO: A TRAVELER'S LITERARY COMPANION, and author of MIRACULOUS AIR, a Baja California memoir, has won three Lowell Thomas travel writing awards and the Flannery O'Connor Short Fiction Award for SKY OVER EL NIDO. Her poetry has appeared in Exquisite Corpse, Natural Bridge, Rio Grande Review, and West Branch, among many other literary magazines, as well as in anthologies, most recently, Robert Giron's POETIC VOICES WITHOUT BORDERS. Visit her website: C.M. Mayo or her blog:
MadamMayo


Robert L. Giron, trilingual editor of the award-winning English-Spanish-French POETIC VOICES WITHOUT BORDERS and AN INTERDISCIPLINARY INTRODUCTION TO WOMEN'S STUDIES, is co-poetry editor for POTOMAC REVIEW and editor of the literary Gival Press. He has five collections of poetry, and teaches at Montgomery College-Takoma Park / Silver Spring. Visit: GivalPress.com


The next Kensington Row Bookshop reading will be Wednesday, 27 September 2006, at 7 pm, with Grace Cavalieri and Donna Denize.

The Corporation Is a Must See Documentary

Winner of twenty-four international awards, The Corporation, written by Joel Bakan and directed by Mark Achbar and Jennifer Abbott, is truly an eye-opener with regard to how corporations actually work and is shocking because of the damage some corporations can thrust upon the general public. Obviously not all corporations display the clinical disorders this documentary points out, but the viewer will definitely see corporations in a different light.

Using the Manual of Mental Disorders DSM-IV, the documentary illustrates how certain corporations display behaviors that would be classified as psychopathic if they were "human beings." These behaviors include: 1) callous unconcern for the feelings of others, 2) incapacity to maintain enduring relationships, 3) reckless disregard for the safety of others, 4) deceitfulness and repeated lying and conning of others for profit, 5) incapacity to experience guilt, 6) failure to conform to social norms with respect to lawful behaviors.

For those who hold stock in corporations, it is perhaps a relief to know that the loyalty of a corporation is to its stockholders; however, of late many stockholders have begun to question the high salaries going to corporate officers and board members instead of profits going to the actual stockholders.

With regard to psychopathic behaviors, corporations are focused on the bottom line and this short sightedness "permits" them to not worry about any residual effects their policies or actions might have on the general public. Of course, if the general public eventually becomes ill or dies as a result of the residual effects, the corporation may no longer have customers for its products or services, but this does not seem to phase the most psychopathic corporations.

In today's terms, this is similar to corporations changing laws and policies via Congress to suit themselves at the cost of diminishing the middle class or their base customers. Eventually some corporations might find themselves out of business but not before they will have made their substantial profits.

This highly recommended documentary contains interesting findings with regard to effects as a result of 9/11 as well as examples of how communities have been able to confront injustices such as the Bolivian victory to control water rights in Bolivia.