Photography by James Gardner in ArLiJo

The October issue of ArLiJo is featuring photography by James Gardner.

Coming This Fall from Gival Press

Riverton Noir by Perry Glasser, winner of the 2011 Gival Press Novel Award will be released in October.

“In Riverton Noir, Perry Glasser browbeats high and low brow art into a work of sublime halftone pulp picture printing, shading stuttered shadows with the darker side of your so-called comic book. His pointillistic prose pops like Pop Art, but it’s as pleasing as all get out in all that it knows and shows.” —Michael Martone, author of Four for a Quarter
But if you would like to pre-order a copy, please contact Gival Press: givalpress@yahoo.com.


Grip by Yvette Neisser Moreno, winner of the 2011 Gival Press Poetry Award will have its book launch on November 18, 2012 at Busboys & Poets on 14th St. NW in Washington, DC.

“'Some of us live at a slant',” the poet Yvette Neisser Moreno writes in Grip and then proceeds to show us how, in language soothing and startling, both. The poems are 'a slow plea/for the beating of human hearts,' whether among the conflicts and struggles of the Middle East or within a single family or a single one of us wrestling with her grief. These are poems of great humanity. Read them for their crystalline truths and for the joy they find in our difficult hearts." —Sarah Browning, director of Split This Rock and author of Whiskey in the Garden of Eden 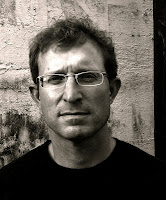 Action
“He’s big, he’s mean, and he kills a lot of bad guys.
“No one cared that he was gay.”
—testimony from a Pentagon report


More than grunts,
we tongue Arabic and Farsi
in the dusty streets and shops. Watching, listening
carefully—very carefully—between
straight black abayas and embroidered white caps.
We’d rather talk them down, but we’ll shoot.
We know the soft and hard of man. Face in the tower,
bulge in the pants. Our M-16s and that nasty SAW
put the queer fear in their Sharia law.
Like Negroes marching on the old South,
we’re a nightmare bayonet up their hanging moons.
Don’t get fucking captured, I tell my men, and they don’t.
Snugging green belts across our tight abs,
we smarten our collars
and slip on those big blonde boots. Fit in? Come on,
we’re good at that. We had to be.
Give us the action
and we can all relax.

Biography:
Henry Hughes grew up on Long Island, New York and he has lived in Oregon since 2002. His poems have appeared in Antioch Review, Carolina Quarterly, Malahat Review, Shenandoah, Southern Humanities Review, Seattle Review and Poetry Northwest, and are represented in several anthologies including Long Journey: Contemporary Northwest Poets (Oregon State University Press). His first collection, Men Holding Eggs, received the 2004 Oregon Book Award; his second book, Moist Meridian, was chosen by Robert Pinsky as a finalist for the 2011 Oregon Book Award; and his third collection, Shutter Lines, was published in 2012. He is the editor of the anthology, The Art of Angling: Poems about Fishing (Knopf, 2011) and his commentary on new poetry appears regularly in Harvard Review.

The Boy on King Street
by Sean Johnson of Houston, Texas.

The Greatest Magic Act of All
by Renny Christopher of Camarillo, California.

ArLiJo is currently featuring work by José-Flore Tappy in translation by John Taylor.


Gival Press is close to announcing the winner of the Oscar Wilde Award.