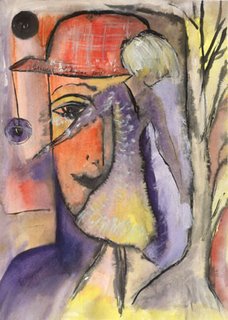 
ArLiJo, the Arlington Literary Journal online, is currently featuring poet / artist Katharina Yakovina was born in the Ukraine. ArLiJo features poets / writers / artists who have a positive take on humanity and whose work can speak to various people regardless of the borders that separate us.

These include Collected Poems by Ed Cox who died in 1992, but whose work was praised by such poets as Gwendolyn Brooks: "Ed Cox is interested in Making a Difference, through acts and through poetry (which for him, is act). His work clarifies for us much that is opaque and dizzying in this most complex of times."

A gay poet, Ed Cox, would be pleased that his work is still out in print, regardless of the fact that the press is not gay owned. What matters is the work and getting a poet's work to the public, for that Paycock Press should be commended.

With regard to In Praise of What Persists by Joyce Renwick, this is the first published collection of her work. Unfortunately prior to 1995, when she died, her work had only appeared in such journals as The Southern Review, Sewanee Review, Best American Short Stories among others.

Of her work, Julia Alvarez stated: "Joyce Renwick lets us into the hearts, minds and souls of so many different characters. It is like having her back among us to read these moving and luminous stories."

Stop the War in Israel & Lebanon!

Where are the cries for the loss of innocent lives in the Israel & Lebanon War?

The senseless killing has to stop!

An eye for an eye will not create peace in the Middle East nor make the borders safe.

Understanding and respect for all human beings must prevail before any peace can be created.

Why are not world leaders doing their best to stop this madness?

The 20th season of the Potomac Theatre Project at the Olney Theatre Center shines brightly with two relevant plays: No End of Blame by Howard Barker, directed by Richard Romagnoli, and An Experiment with an Air Pump by Shelagh Stephenson, directed by Cheryl Faraone.

Both plays are wonderfully acted. No End of Blame has local actors Paul Morella and Helen Hedman who perform their roles with just the right finesse. Morella as the somewhat disturbing creative type, Bela Veracek, and Hedman in a variety of short roles in this play which raises the question of what obligation does the artist or cartoonist have to himself and the society in which he lives. Certainly the Danish cartoons of this year makes this play relevant and the censorship portrayed in the play also raises questions of the role of journalists in USA today, though the play is dealing with the British World War II scenario.

An Experiment with an Air Pump also raises questions that are relevant in today's society with regard to scientific developments and the role of women in the workplace. Connan Morrissey plays two interwined roles brilliantly as does Clinton Brandhagen but Tara Giordano nearly brings the audience to tears in her superb role as a Scottish servant.

There's still time to catch these plays and I recommend them highly.

Plays which Play with the Mind 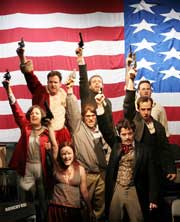 Why not catch a play in the heat of July in Arlington? We are fortunate enough to have two very good plays showing which both include the mystery of the mind and how and why people do odd if not reprehensible acts.

Specifically, I'm speaking of Assassins by Stephen Sondheim, book by John Weidman, at Signature Theatre. Director Joe Calarco does a great job of interpreting this rather disturbing play. James Kronzer's set design doesn't quite hit the audience until the end of the play.

While this play is not Sondheim's best play, there is a lull in the middle, the actors do a superb job of letting the audience enter the minds of the assassins. The program notes are very helpful and offer a rather surprising bit of history with regard to the party which has had the most encounters with assassins. Of note are the performances by Will Gartshore, Donna Migliaccio, Mika Duncan, and Priscilla Cuellar.

The other play of note is Two-Headed by Julie Jensen at the Washington Shakespeare Company at Clark Street Playhouse. This simple play enters the minds of two Mormon women played extremely well by Mellissa Flaim and Lee Mikeska Gardner.

Both Assassins and Two-Headed display the thin line that divides the sane from those who step into the deep. After viewing these plays, one comes away thankful that most of the population is still under control.