Julyan Peard of San Francisco, California has won the 2015 Gival Press Short Story Award, which has a cash prize of $1K, for her story titled The Constellation of Scorpio. The short stories submitted for the award were read anonymously and the winner was chosen by the previous winner Steven J. Cahill. 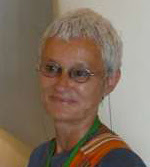 Praise:
“’Nothing here is as pristine as it looks.’ An astronomer is told this by his Argentine hosts when he arrives with his family to set up an observatory and map the southern skies. He intends to contribute to science while pursuing his dream of recording and cataloguing more stars than any astronomer in history. His wife and daughters enjoy the hills and streams of the Argentine countryside, but while their hosts are away she inadvertently discovers their disturbing artwork.

Using a meridian circle telescope from Repsold with a four and a half-inch aperture, the astronomer looks into the firmament and explores the Constellation of Scorpio. He is able to capture its mysterious beauty with celestial photography.

Using a multi-voiced narrative including diary entries and letters, the author looks into her characters’ hearts and explores their earthly deceit and betrayal. She is able to capture the punishment with prose that flows like an Argentine river.

‘The wheels of God grind slowly, but they grind exceedingly small.’ Indeed they do. And after the astronomer commits his earthly sins but believes he has made retribution, we are taken gently by the hand and allowed to see exactly how fine the wheels of God do grind.

The bright stars in the skies of the southern hemisphere were reputed to affect men’s behaviors in strange ways. The bright lights of Julyan Peard’s writing show us the results of those behaviors in The Constellation of Scorpio.”— Steven J. Cahill, judge for the 2015 Gival Press Short Story Award


Biography:
Julyan Peard was born in Argentina and educated in Argentina, England and the US, where she has lived for over twenty years. She has taught Latin American history with a focus on travel narratives, and for the last decade she has been writing short stories, all of which are linked to Latin America and informed by history.

My fiction has been published in The Missouri Review and The Chariton Review. She recently completed a book length biography of her great-grandmother titled An American Teacher in Argentina: Mary Gorman’s Nineteenth-Century Odyssey from New Mexico to the Pampas, to be published by Bucknell University Press in 2016.

As an historian of Latin America, she has published a scholarly book, Race, Place, and Medicine: The Idea of the Tropics in Nineteenth-Century Brazilian Medicine (Duke University Press, 1999) and articles in historical journals. She has received funding from a number of institutions, including fellowships from the Spencer Foundation and the American Council of Learned Societies and two summer stipends from the National Endowment of the Humanities. In 2015, she was awarded a month-long residency at Ragdale Foundation to focus on fiction writing.

Finalists:
Garden for Loss by Jan Bowman of Columbia, Maryland.

Like Cherries by Kyle Lucia Wu of Brooklyn, New York.

When the black voices of crows by Jo Gardiner of Woodford, Australia.